In the South, there’s a popular saying: Whether you’re going to heaven or hell, you’re going  through Atlanta.

Indeed, as the world’s busiest passenger airport, it’s hard to avoid Hartsfield-Jackson International (ATL). But here’s something most people don’t know about the hub, it’s also a place to learn history.

Three civil rights exhibits give travelers an introduction to the history, and are one of the best things to do in the Atlanta airport. Although designed for airport passengers they’re also worth a visit for those spending time in the city.

“The world’s busiest airport ends up being a surprising place to learn civil rights history.”

The Atlanta airport’s civil rights exhibits include separate areas focused on Martin Luther King Jr. and John Lewis, along with a third detailing the city’s civil rights challenges and triumphs. 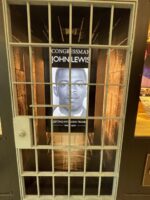 As an airport official said at the dedication of the John Lewis display in 2019, more people may see the airport’s exhibits in two weeks than will visit New York’s Metropolitan Museum of Art in a year.

While it might seem odd to visit an airport to learn history, the John Lewis display near the domestic terminal atrium may be the most comprehensive in the city devoted to the former congressman. Although you can find mentions of Lewis at various sites in the city, Atlanta doesn’t have a specific exhibit or any extensive displays devoted to him. The airport’s King display, curated by the King Center, provides insights into his personality, letting visitors get to know him as a man, not just an icon.

Two of the areas – the one’s focusing on King, and the city’s history – are within the airport’s secured area, meaning you won’t be able to see them without an airline ticket. The Lewis display is outside the security area, which means that if you’re connecting flights, you’ll have to allow time to pass back through TSA and airport security. But if you have a time, each are worth a visit.

Here’s an airport map to get you oriented.

The newest airport display, “John Lewis — Good Trouble,” honors a hero of the civil rights movement. The Freedom Rider led the Selma-to-Montgomery March, and spoke at the March on Washington. He served for 17 terms in Washington, where he was known as the “conscience of Congress.”

Installed in 2019, a year before Lewis’ death, the four display cases located between the domestic terminal atrium and the arrivals hall, offer a surprisingly detailed look at the man. Noteworthy artifacts include the pen President Lyndon Johnson used to sign the U.S. Civil Rights Act, and an envelope from Barack Obama’s inauguration signed by the President. “Because of you John, Barack Obama,” Obama wrote.

You’ll also see an arrest file from his first protest as a student in Nashville, Tennessee; a John Lewis action figure; and original pages from March, his three-part best-selling autobiography told in graphic novel form. Other notables include the hat from the dedication of the U.S. Navy Ship John Lewis. 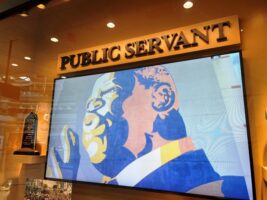 Separate cases delve into Lewis’ history and motivations. Labeled Preacher, Activist, Public Servant, and Visionary, they tell his story from a dirt-poor upbringing on an Alabama tenant farm to the global stage. Note the chickens in the first case – they’re a key to his motivation. When he was a child, Lewis wanted to be a minister. Each night when he fed the chickens, he would preach to them.

Videos include excerpts from Lewis speeches, and the Morehouse College Glee Club singing We Shall Overcome. Below the cases, you’ll see lyrics from spirituals and the Freedom Songs sung by activists during protests and when they were jailed.

But take time to note other details as well. The painting over the cases is surrounded with riveted metal, meant to evoke Selma’s Edmund Pettus Bridge, where Lewis was beaten. And the wall is outlined with a Japanese style charred wood, meant to evoke the strength of protesters, and also a nod to the rural farmhouse where Lewis was raised.

Look at the painting at the top, called A Hero’s Journey, which depicts notable moments from Lewis’ life, like the Freedom Rides, Selma and sit-ins.

International visitors should note that the display may be difficult to reach.  If you’re not connecting to an ongoing flight that day, you’ll have to exit the international terminal, and then take a shuttle bus to the domestic terminal.

For others, it’s simple. After clearing U.S. Customs, you’ll find yourself at the eastern end of the airport. If you have an ongoing domestic flight, it’s easy: Just take the airport train to the opposite end and exit at the domestic terminal. (Make sure you have your domestic boarding pass and ID, so you can return through security to board your flight.)

While it appears to be a collection of knick-knacks and memorabilia from King’s life, the exhibit actually offers a surprising window into King’s personality, his insecurities and his struggles.

Start on the side facing the wall to learn about King, the man. There’s a rare childhood photo when he as two, and an image of him with playing with his brother. Here we learn about King as a child. The future preacher, we’re told, felt the sting of racism when he was six, when the mother of two white boys would not let them play together.

But King grew up in a relatively prosperous middle class setting, as family and college graduation pictures show.

There’s also a picture from his wedding to Coretta Scott King, which is particularly instructive. Martin, we learn, talked about marriage on their first date, when they were both in graduate school in Boston. Aside from his activism, we get a glance of King as father and husband. There’s a picture from a King family dinner, and others show him on a playground and tossing a baseball with his children.

Also, notice the display showing his glasses – although King didn’t need them, he felt they made him look more intelligent. There’s also his watch and the transistor radio he would carry to listen to coverage of his marches and protests.

A candid airport waiting room photo shows King and aide Andrew Young, who would go on to become Atlanta mayor and U.S. ambassador to the United Nations. King’s near-constant travel schedule was grueling, an unglamorous part of his life rarely discussed.

Other artifacts are more expected, like the suit worn by King when he met with President Lyndon Johnson to discuss the Voting Rights Act.  There’s a program and protest sign from the March of Washington, and a replica of the Nobel Peace Prize King won in 1964. You can also see a liturgical robe, and a draft of his resignation letter from Montgomery’s Dexter Avenue Baptist Church, where King met Rosa Parks and led the bus boycott that would launch him to international fame.

Written in November 1959, it captures a key moment in King’s life. As the 1960s were beginning, he seemed to realize the role he would play in the coming tumultuous years.

“Unknowingly and unexpectedly, I was catapulted into the leadership of the Montgomery Movement,” he wrote to his congregation in Alabama’s capital city. “At points I was unprepared for the symbolic role that history had thrust upon me. Little did I know … a movement … would change the course of my life forever.”

The city’s airport consists of six concourses connected by a train and walkway. While most people take the train, here’s why you’ll want to walk.  Not only is it good exercise, but you’ll also find a comprehensive display (practically a mini museum) of Atlanta’s history located between Concourse B and C.

Presented sequentially, the 400-foot-long display called “A Walk Through Atlanta History,” uses graphics, videos and 3D exhibits. It includes eight videos and covers the city’s history starting with the pre-colonial era and the Native Americans who called this section of Georgia home, then moves on to the Civil War; the Battle and burning of Atlanta; Reconstruction; the rise of the black Sweet Auburn District; Segregation; and Atlanta’s appearance on the global stage as the host of the 1996 Summer Olympics.

A video (below) shows the reality of segregation and the protests that followed, with the familiar voice of Martin Luther King Jr. in the background.

Take time to examine the exhibit photos and read the text.

The story here isn’t the familiar national tale of civil rights protest, but of Atlanta itself. As the South’s largest population center, it cultivated a reputation as the “city too busy to hate.” But of course, the story is more complicated. 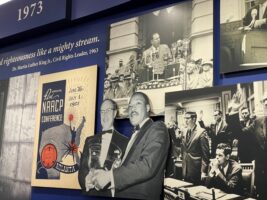 In the photos you’ll see how the city struggled with civil rights. There’s a voting registration drive in the 1940s and an NAACP protest sign that reads “12 other Southern cities have open hotels, why not Atlanta?”

The city is home to the Atlanta University Center, with its flagship schools Morehouse and Spellman colleges, and its students played a key role in sit-ins and pickets.

Other photos capture significant moments and figures in city history from riots to reconciliation. You’ll be introduced to Dr. Benjamin Mays, who graduated from the University of Chicago in 1935 and served as a mentor to King, and learn how the Georgia State legislature refused to swear in duly elected civil rights activist Julian Bond; and also see a city banquet honoring King’s 1964 Nobel Prize – particularly notable since it was one of the first times Atlanta’s White establishment honored King.

Tour of Atlanta follows King from birth to grave