How to plan a Civil Rights Road Trip 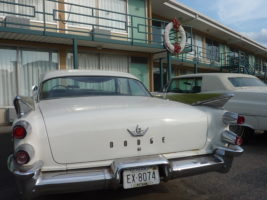 While the key battles of the modern Civil Rights movement focused on the Deep South, monuments, memorials and museums honoring the struggle can be found across the country.

A civil rights road trip will generally take several days, and cover hundreds of miles. Don’t rush. For many travelers, the joy of these journeys are the unexpected conversations you’ll have, and the people you’ll meet.

In each of the cities, we offer guidance on the top sites and their history, putting the story of the civil rights movement into context. Independent travelers can make the trip easily.

However, guided tours can bring the history to life. In most major locations, you can get a tour from a local resident, who often participated in the civil rights movement themselves.

Finally, if you just want to leave the tour planning to someone else, find information about multi-day group tours here.

However you plan to visit, here are the major civil rights road trip routes to consider:

Dive into the Deep South

The classic Civil Rights Trip takes travelers from Martin Luther King Jr.’s birthplace in Atlanta through Montgomery, Alabama’s famed “Lynching Memorial,” to Selma and Birmingham. From there, it’s a few hours through Mississippi to Memphis, site of King’s assassination.

This just scratches the surface. If possible, you’ll want to add visits to places like Tuskegee, home to the famed Airmen, who battled in World War Two and the infamous syphilis study, along with extra time in Mississippi, to see sites associated with the brutal killing of Emmett Till, and the modern, moving Mississippi Civil Rights Museum in Jackson.

Others start a southeast trip in Washington, D.C. home to the stunning Smithsonian African-American History museum and the King memorial, and then traveling to the Moton School in Farmville, site of one of the most inspiring student protests in the movement. Head south to Danville, Virginia, home to to largely forgotten Blood Monday attack, one of the most vicious police crackdown on protesters. Then it’s an easy drive to Greensboro, North Carolina, site of the famous Woolworth’s sit-ins.

The civil rights battle wasn’t limited to the Deep South. One great thing about the U.S. Civil Rights Trail is that it has introduced visitors to historic sites they may never have known about.

For example, Nashville played an out-sized role in civil rights history, although it doesn’t often make the list for many travelers. But it’s a great city and can easily be combined with visits to Memphis, site of King’s assassination, and one of the top civil rights museums in the country, and with Central High School in Little Rock, Arkansas, where the National Guard had to integrate the school. From there, it’s just a few hours to the Greenwood Rising Museum, which commemorates the vicious Tulsa Massacre of 1921.

This trip easily combines with visits to sites in Mississippi and Alabama.

If you can invest over a week and more than one thousand miles of driving, it’s possible to take in all the major sites. For much of the route, you’re following the path of the Freedom Riders.

You’d start in Washington, D.C., with its museums and monuments, and head to Farmville, Virginia for the Moton Museum, then dip into Greensboro, North Carolina, for the Woolworth counter that kicked off the sit-in museum.

Then it’s a straight shot south to Atlanta to take in the major Martin Luther King Jr. sites, before heading to Montgomery, Selma and then Birmingham, Alabama. After that, it’s time to head to Jackson’s stunning Mississippi Civil Rights Museum, before heading up to Greenwood for sites associated with Emmett Till.

After that, it’s an easy drive to Memphis for the Lorraine hotel, site of King’s assassination.

Of course, you could add even more, adding Little Rock’s Central High School; the University of Mississippi in Oxford; and the University of Alabama in Tuscaloosa, the Tulsa Massacre museum in Oklahoma, and even the Brown v. Board of Education National Historic Site in Topeka, Kansas.

In short, there’s history to be found across the country.