UPDATE: The museum is  open daily, except Dec. 25. Free timed-entry passes are required for entry.

From the moment it opened in 2016, the Smithsonian’s National Museum of African American History and Culture has been one of the city’s top draws and one of the world’s top African American museums. For years, it required a reservation, and although it has become a little easier to visit, you generally need to plan ahead.

If you wonder if it’s worth the time, effort and hassle, the simple answer is absolutely.

First download the museum’s app. The multi-level galleries take visitors from the horrors of slavery to the glory of the Olympics. The meticulously researched exhibits follow the literal journey of African-Americans across the Middle Passage, through Plantation society, the Jim Crow era, the modern civil rights movement, and the Obama Presidency.

It’s a thrilling, exhausting and deeply moving experience, and alone makes a visit to Washington worthwhile.

Even the five-story building tells a story. Its unique shape was inspired by a crown from the West African Yourban people. The building gleams with 3,600 bronze-colored aluminum panels, all hung at the same angle as the capstone of the nearby Washington Monument, and makes a great Instagram shot.

Once they’re through the security screening, visitors have a choice. Heading downstairs leads to the main history galleries, a walk-through experience of African-American life from 1400s to the present. This is where the crowds are going, and where you’ll want to go too.

Upstairs, you’ll find galleries devoted to African-American culture, from comedy and show business to music and cuisine. Displays include gems like Jimi Hendrix’s vest, Jimmie Walker’s hat from the ground-breaking sit-com Good Times, and Olympian Gabby Douglas’ leotard. These floors are uplifting, and can help lighten the spirit after the downstairs experience.

My suggestion: arrive either early or late to avoid the biggest crowds. Start with the downstairs history exhibits, then head to the excellent Sweet Home Café for a snack, and end on a positive note with the cultural exhibits upstairs.

Start with the History Gallery

You enter the main exhibit by heading down to subterranean three levels of concourse galleries. Symbolically it feels like descending into the hold of slave ship, with each subsequent step taking you deeper into the African-American legacy.

There’s so much information here that you could literally spend days absorbing the information.

Galleries include shackles, a slave auction block and Ku Klux Klan robes. A statue of Thomas Jefferson is flanked with bricks listing the humans he owned. It’s all offered factually with extensive documentation, which makes the impact all the stronger.

But for many the emotional pivot of the entire museum is the casket of Emmett Till. Visitors line up as they’re at a funeral home visitation to pay honors to the 14-year-old boy, who was brutally murdered in northern Mississippi. His mother’s courageous decision to hold an open-casket funeral in Chicago, shocked the nation when images were published in Ebony magazine. Till’s horrific murder, scholars believe, was the start of the modern Civil Rights movement, and for that we still owe Mamie Till our gratitude.

Now, decades later, its still a heart-rending experience. The curators included a contemplation area for reflection. Take a moment to do just that.

After the viewing the coffin, it’s hard to concentrate on the rest of the exhibits. But the information on segregation, the rise of Martin Luther King Jr., and the bravery of community protesters is so detailed and well-presented that you may want to consider a second visit just to absorb the information.

Interspersed with factual panels are artifacts donated by the public. To start a museum from scratch, curators organized a multi-city Antiques Roadshow-style tour to acquire family heirlooms and treasures. They also called on collectors and celebrities, eventually amassing 37,000 items. About 3,500 are displayed.

Finally, the galleries touch on modern history with election of Barack Obama and the start of the Black Lives Matter movement.

When you step back outside, you’ll feel like you’ve taken a journey. In reality, you have. 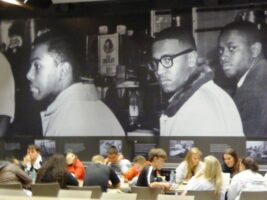 The lowest rung on the food ladder was once the museum cafeteria.  But in recent years the Smithsonian has changed the rules.

Not only is the new National Museum of African American History & Culture the toughest ticket in town, but its Sweet Home Cafe is equally celebrated. The food, an extension of the exhibits, provides a literal taste of African-American culture. The restaurant’s four dining stations—North States, Creole Coast, Agricultural South and Western Range recognizes a tasty heritage with dishes like buttermilk fried chicken, and shrimp and grits. Or try Son-of-a-Gun stew, popularized by Black cowboys.

Lines form for the fried chicken, ribs, and shrimp and grits, but for something different try the pan-fried trout stuffed with cornbread and greens. And for dessert, you owe yourself a sweet potato tart, which tastes like grown-up pumpkin pie. It’s an educational experience, after all.

The museum has been so popular that gaining entrance was sometimes difficult. But it has recently eased up. While entrance is free, visitors sometimes need a timed-entry ticket. While polices do change, no tickets are now needed on weekdays from September through February.

From March through August, passes are required from 10 a.m. to 1 p.m. on weekdays, and all day on weekends.

You can get timed tickets here up to three months in advance, starting the first Wednesday of each month at 9 a.m.

But here’s a pro tip: Same-day tickets are generally available starting at 6:30 a.m.

Or take a guided tour covering the city’s rich African-American history, including the King Memorial and a reserved ticketed entry to the National Museum of African American History and Culture. Or a more detailed Black History Tour takes in sites like Howard University and the Frederick Douglass House.Other cool Washington D.C. tours, including spy tours, Segway tours, night-time bicycle tours, trolley tours, and much more

For a signature Washington experience, head to Ben’s Chili Bowl. When this Black-owned restaurant opened on U Street in 1958, Washington was a segregated city. Over the years, it has fed scores of politicians and activists, everyone from Martin Luther King Jr. to Bono to Barack Obama. There’s even a special Ben’s archive at the city’s George Washington University. Make sure to try a regional specialty called a half-smoke, a large smoked, spicy pork-and-beef hot dog, covered in chili. Also salads and even vegetarian options.

D.C. institution Florida Avenue Grill calls itself the oldest soul food joint in the world.  And sure enough, you’ll find old-school favorites like pig’s feet and chitterlings  on the menu. There’s even salads and vegan sausage patties. 202-265-1586;

Not only does chef Jose Andres make great food, but he has emerged as a global humanitarian, feeding victims after natural disasters like hurricanes, and human disasters like the Ukrainian refugee crisis. He has several great downtown restaurants, including China Chilicano, Jaleo and Oyamel Cocina Mexicana

Looking for a place to stay in Washington?

Willard InterContinental Washington No other D.C. hotel feels more at the center of power than the Willard, a beautiful Beaux Arts building, just a block from the White House. Look for specials or packages because it’s quite spendy. 1401 Pennsylvania Ave. NW, 202/628-9100

If there’s not a convention in town, you often can catch a deal at the Residence Inn or Courtyard by Marriott, which share a lobby, and are walking distance to the Mall.