No location is so closely linked to Martin Luther King Jr. as his hometown, Atlanta. and most civil rights road trips inevitably will find their way to the city.

Given its history and unofficial status as capital of the South, a traveler will find much to see here. Even the freeways honor civil rights heroes, like the section of Interstate 20 named for Ralph David Abernathy, who worked with the Rev. Martin Luther King Jr.  And Atlanta itself is rich in attractions. You could spend days here exploring its history, restaurants and museums.

But the top civil rights sites can be visited in a day. You’ll probably spend most of your time in the Sweet Auburn  neighborhood, home to the National Park Service King Historic Site, which includes King’s birthplace and childhood home, along with Historic Ebeneezer Baptist Church, his home pulpit. And, of course, there’s the beautiful grave site, on the grounds of the King Center, where he and his wife Coretta Scott King are buried.

In addition, it’s worth a visit to the National Center for Civil and Human Rights, which is located downtown near Atlanta’s top museums and attractions, including the Georgia Aquarium and the World of Coca Cola.

Beyond the urban core, you might want to see the home were King lived as an adult.

To understand the scope of the Rev. King’s legacy, one only need visit the National Park Service’s Martin Luther King Historic Site. Exhibits expertly capture Dr. King’s era and follow him from childhood to his historic role on the international stage. Introductory films offer a moving biography along with excerpts from his most famous speeches.King Historic Site, from birth to graveIf you have time, consider the fascinating tour offered by Tom Houck, a former driver for Martin Luther King, Jr. Not only will he point out the sites, but he’ll also share his personal stories about working for King and witnessing first-hand some of the most important events of the civil rights era.

While the visitors center is certainly worthwhile with thoughtful exhibits and films, a highlight is being able to visit King’s birth home, where he spent the first 12-years of his life. A walk through the home, located a block from the center at 501 Auburn Ave., humanizes King and brings him to life. Visitors learn that King was a typical young boy, who didn’t like piano lessons, and rushed through grace at dinner time when he was hungry.

It’s clear King grew up in a loving family. His father and grandfathers were ministers and the neighborhood was part of Atlanta’s Black middle class. While the home dates to 1895, it has been restored and is wheelchair accessible.

Unfortunately, getting tickets for the 30-minute tour may be the toughest part of your visit. The ranger-led visits are limited to 15 people per tour, and run from 10 a.m. to 4 p.m. Worse yet, no advance tickets are available, and groups can get up to 45 tickets, which means available slots can go fast. Tickets are usually gone by 11 a.m., and on school days, they may all be claimed even earlier.

To get tickets, the National Park Service offers the following tips:

One other way to visit is on Saturday open houses, which are held throughout the year. Check with the park for scheduled dates.

For a sense of the tour, watch the video below:

The good news is that you don’t need tickets to visit the park’s other main sites, such as King’s home pulpit, Historic Ebenezer Baptist Church, where he was baptized and his father and grandfather served as pastor. 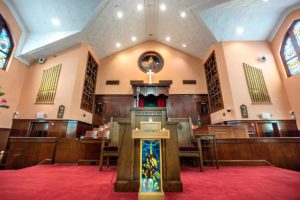 The self-guided tour includes a 20-minute film in the basement fellowship hall with an interview with King’s sister,  Christine King Farris. Visitors also can walk through the sanctuary, where King preached. It’s also where King’s funeral was held.

In total, allow up to 30 minutes for a visit. The video below offers an overview. 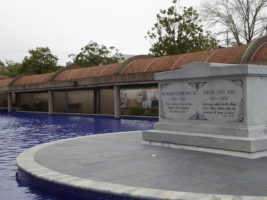 The Rev. King was originally buried in Atlanta’s South-View cemetery, but his wife had him reinterred at the center in 1970.

She too is buried here at a moving memorial, surrounded by water. At anytime, you’ll find visitors from around the world pausing to meditate on his legacy and courage.

Inside the King Center, you’ll find exhibits devoted to King and his wife, along with Rosa Parks and Mahatma Gandhi. Highlights include a replica of King’s Nobel Peace Prize. The Center is also notable for having the most extensive gift shop in the entire park complex.

Just a few blocks away, it’s worth driving by Prince Hall Masonic Temple, where King’s organization, the Southern Christian Leadership Council, housed its offices. This is where King went to work on days he was in Atlanta. It’s located at 330 Auburn Ave NE, Atlanta, GA 30303.

While you’re in the neighborhood, you’ll also find an impressive statue of King outside the Georgia State Capitol.

Located a few miles away from the King site, the National Center for Civil and Human Rights is not an historic site. The impressive free-standing museum is part of the downtown Atlanta’s Centennial Park, which holds a cluster of popular tourist attractions including the Georgia Aquarium and the World of Coca-Cola.

Its location assures a steady flow of visitors, and its offerings, which include historical artifacts and interactive exhibits, are worthwhile if you’re in the area.

The most notable exhibit is the lunch counter, which literally puts visitors in the seats of protesters. Guests sit down at replica counter, don headphones, and place their hands on the counter. They are immediately subjected to taunts and threats, giving a hint of the abuse sit-in protesters faced. A timer measures how long visitors can keep their hands on the counter. It’s an effective and shaking experience, which remains with you.

Other exhibit areas includes Martin Luther King Jr.’s letters and papers, including the early drafts of some of his famous speeches, and his Letter from the Birmingham Jail.

The center costs from $15 to $20 per person. If you’re planning to visit several other city sites, including the aquarium, consider buying a ticket book from Atlanta CityPASS, which offers considerable cost savings.

King’s home, and other city sites

Other sites worth checking out include the home where King lived as an adult with his wife Coretta and their children. It’s located at 220 Sunset Ave NW, Atlanta, GA 30314, in the Vine City neighborhood, near the Atlanta University Center, and the imposing Mercedes-Benz Stadium, home to the Atlanta Falcons.

King’s home isn’t yet open to visitors, but it has been purchased by the National Parks Foundation, and will eventually offer tours.

Nearby, is the Atlanta University Center, the largest contiguous consortium of black schools in the nation. The center consists of four historically black colleges and universities (HBCUs): Clark Atlanta University, Spelman College, Morehouse College (King’s alma mater), and the Morehouse School of Medicine. Not surprisingly, the campus was the scene of protest activity, and is scattered with historic markers and statues.

Several miles outside of town is South-View cemetery, Atlanta’s oldest black burial ground. This is where King’s parents are buried, and where King himself was originally interred before his body was moved to the King Center. The graveyard has faced vandalism over the years, and you can even see where gunshots scarred the graves of the elder Kings.

If you’re planning to visit several city sites, including the civil rights center and the aquarium, a ticket book from Atlanta CityPASS, which offers considerable cost savings.

If you want to visit Alabama’s civil rights sites, including Birmingham, Selma, Montgomery and Tuskegee, you can take a 12-hour tour with transportation from Atlanta.

Metro Atlanta has no shortage of hotels and motels, from chains to luxury locales.

Georgia Tech Hotel and Conference Center You don’t have to be a rambling wreck to stay here, although you’ll see a replica of the university’s namesake auto in the lobby. A comfortable full-service hotel convenient to downtown sites. 800 Spring Street Northwest, Atlanta, 404/347-9440.

Sheraton Atlanta One of the closest hotels to the King sites, making it easy to arrive early to get tickets for the birth home. 175 Piedmont Avenue Northeast, Atlanta

Hampton Inn Alpharetta/Roswell, GA This basic motel keeps you out of downtown traffic, and is convenient to suburban locations. 10740 Westside Parkway, Alpharetta, GA

You’ll find a world of dining choices in Atlanta.

Perhaps more civil rights history was planned inside this restaurant then any other place in the world. This is where King and his colleagues came at all hours to refuel, and to set strategy. Come for the fried chicken, greens and other soul food specialties. But make sure to check out the signs, pictures and plaques.

This super 1950s-era hamburger stand has been loved by generations of visitors. Sit in school desks, order extra onion rings, and don’t forget the Frosted Orange shake. This is not fine dining, but if you’re catching a meal on the go, it’s much more fun and memorable than typical fast food.

Note: If you book travel or make a purchase through one of our partner or affiliate links, we may receive a commission or fee.