Bloody Sunday and the legacy of Selma: A city tour 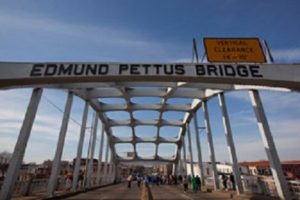 Before 1965, the world had never heard of Selma.

But in March that year, it became known around the world as a place of protest, marches and savage police beatings on what is now called Bloody Sunday.

Every Selma visitor has an obligation to cross the bridge, which I once called the most beautiful place in America. The experience is deeply moving, having the power to literally put you in the footsteps of the protesters. When you reach the top, pause. Look across the river and imagine you’re facing a phalanx of law officers with riot gear and billy clubs, whips, horses and tear gas.

Ask yourself, what would I have done?

There’s a reason Presidential candidates make a point of visiting Selma for the annual Bridge Walk, a community celebration every March that marks the events that happened here. If you’re traveling at that period, it’s worth attending, although it will complicate trip planning because of crowds and limited availability of hotel rooms in the city.

In many ways, Selma was the apex of the Civil Rights movement. The brutality and the march to Montgomery that followed shocked the nation and led directly to the passage of the national Voting Rights Act.

Today Selma is small, sleepy Southern town. The first challenge is getting to the small central Alabama town, which even now feels isolated, miles from any interstate.

It’s a good two-hours’ drive from Birmingham, or nearly an hour from Montgomery. From Atlanta, allow three.

But once here, you’ll find yourself in the center of the movement. The most striking sight is the Edmund Pettus Bridge. Even if you’ve never set foot in Alabama before, the span will look eerily familiar from news coverage and documentaries. It’s such an important landmark that the crew for the movie Selma came to town to stage the crucial bridge crossing scene, while most the rest of the movie was made in Georgia.

A visitor can at most spend a few hours here, passing by the churches where the marches were organized, stopping by the National Park Service visitors center, and walking the bridge.

Other stops include the National Voting Rights Museum, and the Civil Rights Memorial Park. Although it’s not on many tours, the Old Depot Museum’s Civil Rights Room is worth a brief stop to see the hospital logs recording the injuries of marchers on Bloody Sunday.

If you are with a group, consider hiring local guide Joanne Bland, who participated in the Bloody Sunday march. Her account of that horrifying day is riveting, and makes the history come alive.

This post will cover the sites in Selma itself. We offer a guide to driving the Selma-to-Montgomery trail separately.

The small city on the Alabama River found minor fame as a supply center and battleground during the Civil War, but for the most part, it was a forgotten backwater. All that changed after the February, 1965 murder of Jimmie Lee Jackson by the Alabama State Police. Jackson was a resident of Marion, which is 27 miles away. Some may want to make the trip to see the site of the shooting, and his grave outside of town. 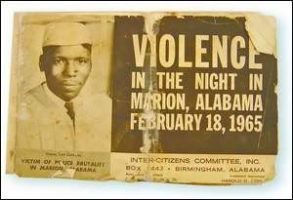 King, it’s worth noting, knew the area well because his wife, Coretta Scott was from Marion, and he was married in the small town. Her home and the family grocery store is noted with an historic marker.

Selma itself was run by a ruthless sheriff Jim Clark, who suppressed any attempt to register Black citizens to vote. In 1964 the city had been visited by hundreds of volunteers from SNCC (the Student Nonviolent Coordinating Committee). By some measures only 300 of the city’s 15,000 potential Black voters were registered.

Clark formed a posse of Ku Klux Klan members and resisted the registration drive during 1964. Following Jackson’s death, attention turned again to the Selma. King and others were drawn to the city, and many mass meetings were held along what is now Martin Luther King Jr. Street, formerly Sylvan Street.

After Jackson’s murder, James Bevel, a leader of the Southern Christian Leadership Council, called for a peaceful march to 50 Montgomery, the state capital located about 50 miles east of Selma along Highway U.S. 80.

But it wouldn’t happen without a fight.

The federal National Park Service visitor center makes a good stop to get oriented. It’s located at 2 Broad Street, across the street from the Edmund Pettus Bridge, which carries U.S. 80 across the Alabama River.

Inside you’ll find exhibits, historic photos, maps and helpful park rangers. It’s a good place to make a bathroom stop, get a drink of water and plan your visit. It has a small bookstore and gift shop.

As you enter the center, notice the figure behind the desk at the entrance. In the video below, a park ranger explains the significance. The figure represents a voting registrar and the props on his desk illustrate the challenges blacks faced when trying to register to vote. That explains the big jar of jelly beans. A registrar might ask a potential voter to tell him the number of jelly beans. And look for soap. Another question asked was the number of bubbles in a bar of soap. Those were the first hurdle before anyone could even take the required 68-question literacy test of Black voters. Whites were only asked one question.

The center lays out the events that led to Bloody Sunday. On that day, March 7, 1965, about 600 protesters led by SCLC’s Hosea Williams and SNCC’s John Lewis left Brown Chapel to march to the bridge. Alabama Governor George  Wallace had banned the protest, and the marchers were ordered to stop.

They paused briefly, but continued to advance. And then the attack started. State troopers rushed to the marchers swinging billy clubs. Lewis fell to the ground with a cracked skull. Sheriff Jim Clark’s posse fired tear gas, swung bull whips and rubber tubing wrapped in barbed wire. White crowds cheered on the attack.

The nation was horrified when images of the violence aired on national television that evening, and in the days that followed marchers from around the country began to descend on Selma. Hundreds of clergy came from around the nation, including the Rev. Abraham Akaka, who brought floral leis from Hawaii, and noted Rabbi Abraham Joshua Heschel.

Two days later, on March 9, Martin Luther King, Jr., led a march to the bridge, stopping at the top to pray, but because the march was still outlawed, he stopped, and marchers returned to Selma. This became known as “Turnaround Tuesday.”

Shortly after that day’s march, the Rev. Jim Reeb, a Unitarian minister who had rushed to Selma from Boston to support the march, was attacked on a side street in Selma, He died two days later in Birmingham from head injuries.

A monument outside the Old Depot Museum honors his memory.  The museum is worth a stop for its Civil Rights Room, which contains the hospital log of the Good Samaritan Hospital, which records the death of Jimmie Lee Jackson and the treatment of marchers injured on Bloody Sunday.

For a deep dive into Reeb’s murder, download the seven-part NPR podcast White Lies, about the search for his murderers decades later.

While in town, note the Dallas County Courthouse, 105 Lauderdale St., 36701 where Sheriff Jim Clark ruled the town. The building was a flashpoint because it was here that African-Americans were consistently refused the right to register to vote.

Selma’s black community focused on Sylvan Street, which was home to its most important churches. The street’s name was later changed to honor Martin Luther King, and it’s worth taking a drive or walk down the boulevard. In 1965, this was the center of all the action.

Important stops include Brown Chapel AME Church, where the march was organized and began, shown below. Tours are by appointment, and can be arranged through Joyce O’Neal
(334) 875-3112 or (334) 505-9779, brownchapel.selma@gmail.com 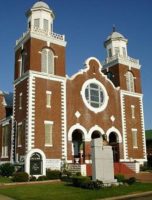 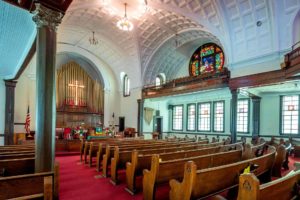 Nearby, the First Baptist Church was the home of Selma voting rights campaign organized by SNCC, and King spoke here several times as well. Remember that the civil rights movement was not run by a single organization. King’s Southern Christian Leadership Council (SCLC) was one of many groups who were pushing for civil rights, and there were often rivalries between the organizations.

Crossing the bridge: following the footsteps of history 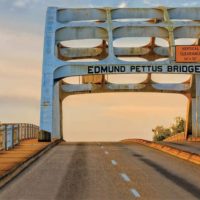 Don’t feel shy about walking across the bridge. It’s a simple, but powerful act that literally puts you in the footsteps of history. Visitors make the crossing every day.

It’s worth noting that the bridge is named for a former Confederate officer. Edmund Pettus later became an influential politician, serving in the U.S. Senate, and also as Grand Dragon in the Ku Klux Klan. It might seem ironic that his name’s associated with a signature moment in the civil rights, but in the South, such contradictions are literally part of the landscape.

As you reach the high point of the bridge, stop and look ahead to the eastern landing. Imagine what you would do if you had been marching on March 7, 1965. Ahead of you waited police and troops on horseback.

Would you have had the courage to keep walking, knowing what awaited?

Once you reach the eastern side, stop by the Civil Rights Memorial Park on the left, where monuments remember the protesters and trails lead through woods with Spanish moss.

After crossing the bridge, plan a visit to the National Voting Rights Museum and Institute, which displays artifacts from the voting rights campaign, starting from before the marches and to the present.

The museum includes pictures taken at the protest, and exhibits chronicling the history of race relations in Alabama. 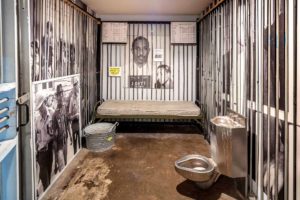 If you find the Klan robes unsettling, imagine what it would be like to see them in the middle of the night.

Among the most compelling images are photos taken by the Alabama State Police documenting the march and the violence. They’re now on display in the gallery.

Also of interest are exhibits about other key moments in the civil rights movement, including less-known campaigns in Albany, Georgia and St. Augustine, Florida.

And if you’re in Atlanta, and want to visit Alabama’s civil rights sites, you can take a 12-hour tour with transportation that will take in key landmarks in Birmingham, Selma, Montgomery and Tuskegee.