One of the most shocking moments of the civil rights movement occurred on Mother’s Day, 1961, when the Freedom Riders reached Anniston, Alabama.

As the bi-racial group of integrated college students and activists passed through the small city roughly halfway between Atlanta and Birmingham, their bus was attacked and set on fire. On a second bus, riders were beaten and severely injured. And when they finally arrived in Birmingham hours later, they were beaten again. You can learn the story at Freedom Riders National Monument, and on Anniston’s Civil Rights Trail

The riders were traveling from Washington, D.C. to New Orleans to test a federal law that prohibited segregation in interstate transportation, which included buses, trains and even bus stations.

The campaign met opposition as it entered the South. John Lewis and two other riders were beaten and arrested in Rock Hill, South Carolina, several days before. And as the riders reached deeper in the South, the danger increased.

“One of the most historic spots in the modern civil rights movement.”

Anniston is where the effort exploded into public view, with a searing photo of a burning Greyhound bus running in newspapers around the world.

For years the industrial town in the Appalachian foothills tried its best to ignore the history, but in 2017 the federal government established the Freedom Riders National Monument. While progress has been slow on the park, the city has created a Civil Rights Trail linking key sites from the Freedom Rides and the city’s civil rights history. While Montgomery’s Freedom Rider Museum does an excellent job telling the story, it’s worth a stop in Anniston just to hear recollections from Freedom Riders that play on two audio boxes placed by historic markers

Work has accelerated on the park, but even now, the city, an easy detour off Interstate 20, is worth a visit.

First the basics: The Freedom Riders traveled on two buses, a Trailways and Greyhound, and they each encountered violence in Anniston. While neither bus station is in operation now, they’re noted by historic markers, detailed interpretive signs, murals, and the audio boxes.

The two sites form the heart of the city’s civil rights trail. We’ll cover those details and then mention the other stops. The former bus stations are just a few blocks apart, and if the weather’s nice, it’s easy to walk between them. You should have no trouble finding a parking spot on Noble Street, which allows two hours of free parking.

At the former Trailways station, 901 Noble St. (Stop 2 on the Trail), you’ll find a mural of the bus, see an historic marker and can listen to the recording from Freedom Rider Charles Person.

As you’ll learn, the Trailways bus was the second to arrive on May 14. The riders had been menaced since leaving Atlanta, when a pair of Klansmen boarded the bus and taunted passengers that they would face danger in Anniston.

As Freedom Rider Charles Person recalls, when the bus finally reached Anniston, eight Klansmen entered and began beating the riders, eventually covering the bus floor with blood and forcing them to segregate by race. When the bus finally left, it took an alternative route to avoid a crowd that was waiting for them outside town.

During the hourlong ride to Birmingham, the Klansmen continued to harass the riders. And when the bus finally arrived in Birmingham, they were brutally attacked again.

Hear Charles Person’s recollections of that dangerous day below.

After the Trailways station,  head to the former Greyhound station 1031 Gurnee St. (Stop 3). Again, you’ll see markers, signs, murals and an audio box with rider Hank Thomas’ recollections. This is where the National Park Service plans to place a visitors’ center, along with other services.

Extensive signage tells what happened: The Greyhound left Atlanta and arrived in Anniston at 12:54 p.m., where a crowd of about 75 people awaited.

Once the bus parked, several men started banging on the bus with bats and pipes, slashing the tires, and trying to smash the windows. After about 20 minutes, police finally arrived, and cleared the way for the bus to leave. Dozens from the crowd jumped into cars to follow the bus. You can hear Hank Thomas’ recollections of the day below.

I’d suggest you continue on the downtown Anniston walking tour, and then later drive east of town (toward Birmingham) to retrace the route on State Highway 202. 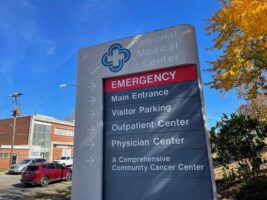 Now double back through town, and head to Anniston Memorial Hospital, now called Regional Medical Center, at 10th and Christine streets, and fronted by an historic marker. (Number 7 on the trail.)

After the attack, seven injured riders from the Greyhound bus were transported to the hospital. Medical staff told the riders to separate by race since the hospital was segregated. But when the activists refused, doctors relented and treated them all in the emergency room. Meanwhile an angry white crowd had gathered outside.

Several hours later the Rev. Fred Shuttlesworth arrived from Birmingham. Shuttlesworth has been called the bravest man in the civil rights movement, partially because of his behavior that day. He pushed his way through the mob, and picked up the riders and to bring them back Birmingham. Due to his stature and fearlessness, no one stopped him.

Before heading out of town, it’s worth seeing other sites on the civil rights trail including the public library, 108 E. 10th St. (Number 6 on the Trail) and the train station, which is about a mile away at 144 W. Fourth St. (Number 1 on the Trail).

Black residents or students from nearby Talladega College staged protests against segregation at both sites. Also stop by 17th Street Baptist Church, 801. W. 17th St., (Number 9 on the Trail), site of mass meetings, where such notables as Martin Luther King, Rosa Parks, and Thurgood Marshall spoke. 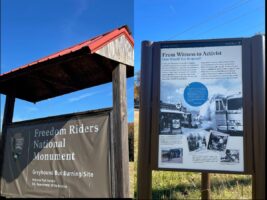 Located about six miles outside the city on State Highway 202, the Bus Burning Site (Map here) is on the way to Birmingham. This is one of the most historic spots in the modern civil rights movement. Stop here to imagine the terror the riders faced.

Pull onto the side street on the southern side of the two-lane highway, and park in a small gravel area.

The site of the attack is well outside of town. When the bus arrived here, the Anniston police escort had fallen away, and the riders were on their own. This is where the bus stopped when its slashed tires finally gave out. Remember, the bus was being trailed by cars and as soon as the Greyhound halted, a crowd of Klansman swarmed around the vehicle.

Someone smashed a window and threw a flaming bundle of rags into the bus, setting it ablaze. As choking passengers struggled to escape, freelance photographer Joe Postiglione took one of the most memorable pictures of the era, which was seen around the world. (The photographer himself was soon forced to leave town due to death threats to his family.)

The mob leaned on the door hoping to trap the riders inside and burn them alive. It’s only when a gas tank exploded that the attackers backed off. As passengers stumbled off the bus and out of the windows, they were beaten by Klansman. Rider Hank Thomas says he would have died if not for an undercover Alabama state policeman who secretly had been traveling with the riders since Atlanta. He pulled out his gun and fired in the air, and the attackers scattered.

Meanwhile, the riders coughed and choked from the smoke. Janine Forsyth, a 12-year-old white girl, watched the violence unfold from her home across the street. She rushed out to the bus with buckets of water for the riders.

The violence of May 14, 1961, was almost enough to stop the Freedom Rides. The protest was suspended for several days, as U.S. Attorney General Robert Kennedy negotiated with state officials and the riders, trying to assure their safety.

When the rides resumed on May 20, the protesters left Birmingham under police escort, but once again the protection disappeared, and the riders were viciously attacked in Montgomery, Alabama, setting up another national standoff to preserve their safety.

Classic on Noble: Come to this old-fashioned downtown restaurant for a rich selection of upscale Southern dishes, like shrimp and grits, pork chops, baked salmon or lamb. Their Sunday brunch buffet is legendary.

Rosie’s Gourmet 2 Go: Great stop for a tasty burger, sandwich or salad. Open for lunch, and dinner Wednesday through Saturday.

Hotel Finial, BW Premier Collection: This 61-room boutique hotel is one of the top rated in the state. Walking distance to restaurants.