Dr. Martin Luther King was a frequent visitor to Birmingham, and came to know the city’s racial strife — and its African-American leaders.

It would be hard to understate the city’s role in Civil Rights history, which makes a Birmingham tour, a key experience for any visitor. The city, once known for police-dog attacks and murder, is now a leader in preserving the history of the Civil Rights era. Today visitors find a sophisticated metro area that looks to the future, while helping visitors explore its rocky, racial history.

Here’s how to see the most important civil rights attractions in Birmingham, Alabama.

The city will become even more important to travelers in the coming years as the Birmingham Civil Rights National Monument, which was formed in 2017, continues to take form. In coming years, the  A.G. Gaston Motel, where King and his lieutenants planned the Birmingham Campaign, will be renovated and open to visitors. For now, visitors can see the building from the sidewalk.

A visitor can see the major sites in one very long day, but we’d suggest taking an extra day. Birmingham, a prime example of a comeback city, offers plenty to keep visitors busy, including parks, restaurants and revitalized neighborhoods.

While most places can be easily visited on your own, Birmingham is one place where it might make sense to hire a guide. Much of the city’s story is tied to its neighborhoods, and a guide can make these areas come to life. For groups of eight and more,  consider the “In Their Footsteps” Civil Rights Tour” with Birmingham native and historian Barry McNealy.

In any case, you’ll want to start your visit with a visceral trip to the past in Kelly Ingram Park, where statues of attack dogs snarl at tourists as they once menaced non-violent protesters, including women and children. 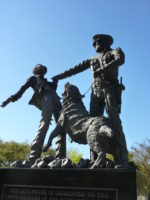 A free cellphone audio Birmingham tour, reached by dialing 205-307-5455, guides you through the park.

The park stands literally in the middle of Birmingham’s history. It’s located across from 16th Street Baptist Church, site of a deadly bombing, and mass meetings and where students and other protesters gathered to march.

Visitors will be shaken by the statues, which include water cannons and depict a policedog jumping at a boy.

Even nearly 60 years after the 1963 marches, which Dr. King help organize, a visitor can only imagine the horror protesters faced. You’ll also find statues commemorating King and other ministers, who led the movement, and the victims, including a heart-breaking tribute to the four girls killed in the church bombing.

While Birmingham came to symbolize the brutality and horrors of the civil rights movement, it also was early to recognize its key role in history. When the Civil Rights Institute opened in 1994, it became one of the first places in the country to honor the civil rights movement. Since then Alabama has been a national leader in recognizing, and promoting the history.

The interactive history museum tells the story of a city that was once known as “Bombingham” because of its racial terror. Exhibits include  a burned out bus representing the attacks on the Freedom Riders, along with video excerpts from a 1961 CBS television documentary about the city that shocked much of the nation.

Another highlight: The jail cell from which King wrote his famous letter from Birmingham Jail. The eloquent plea for non-violent protest has been called the most important document of the civil rights era. It was scribbled on the margins of a newspaper after his arrest during 1963’s Birmingham Campaign that would eventually end segregation in the South. Elsewhere in town, you can find an historic marker in back of the old Birmingham City Jail at 425 6th Avenue South.

You’ll also find a burned Greyhound Bus, a tribute to the Freedom Riders who were attacked in Birmingham during the historic 1961 protest to desegregate interstate transportation through the South. Riders were beaten in Anniston, Alabama, about 60 miles to the east. When protesters arrived in Birmingham on Mother’s Day, they were brutalized as well. A week later, they were beaten in Montgomery. 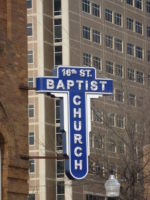 Birmingham’s most notorious site is the Sixteenth Street Baptist Church, located across the street from the park and Civil Rights Institute.

Klansmen placed ten sticks of dynamite by the building early in the morning of September 15 1963. When it went off hours later, it showered stained glass on worshippers and killed four girls attending Sunday school, Addie Mae Collins, Cynthia Wesley, Denise McNair, and Carole Robertson. Their story is told in the Oscar-nominated Spike Lee film 4 Little Girls. 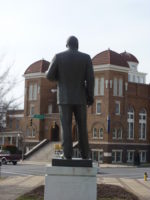 There were other casualties too. Sarah Collins Rudolph, the younger sister of Addie Mae Collins, was 12 and blinded in one eye by flying glass. Later that afternoon Johnnie Robinson, 16, was seen throwing stones at a segregationist’s car and killed by police; and Virgil Ware, 13, was riding on the handlebars of his brother’s bicycle when a white teenage boy shot him in the face and chest, killing him.

The church served as a staging area for the 1963 marches, which is why it was targeted by the Klan. Today, it’s still a thriving congregation, and is open for tours by appointment.

A newly upgraded basement memorial area remembers the victims, and a wall clock is forever stopped at 10:22 a.m., the time of the explosion. Dr. King spoke at the funeral for three of the girls. A visit costs $10 for adult, $5 child.

Everyone has heard of Martin Luther King, but few know remember Fred Shuttlesworth, who has been called the bravest man of the civil rights movement.

While King often took the diplomatic approach, Shuttlesworth favored direct action. It was largely at his urging that King brought his civil rights battle to the streets of Birmingham.

Shuttlesworth, the pastor at Bethel Baptist Church, faced many attempts on his life. One of the most dramatic came on Christmas Day in 1956, when 16 sticks of dynamite exploded outside the church and the adjacent parsonage, nearly killing him. In total, the church survived three bombings and is now a National Historic Landmark, noted by a marker.

Visitors can book a tour of the church through its website. If you only have time to drive by, you can see the outline of Shuttlesworth parsonage, a “ghost house” outlined in white. In total, the church was bombed three times.

Shuttlesworth, and the co-founder of  the Alabama Christian Movement for Human Rights, was also famously pulled from his car and beaten in front of his children when he and his wife tried to enroll them in John Herbert Phillips High School. He describes the attack in the historic video below. (One of the men who attacked him Bobby Frank Cherry later played a key role in the 16th Street Baptist Church bombing.)

It’s also noteworthy that Birmingham’s airport is now named for the Rev. Shuttlesworth. You’ll find an extensive exhibit about the reverend and is historic life on the airport’s baggage level. 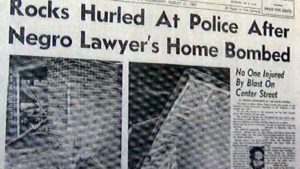 Birmingham’s Center Street in the East Thomas neighborhood earned the horrifying nickname Dynamite Hill due to the frequency of Ku Klux Klan bombings that occurred in the area from the 1940s to the ’60s.

The bombings initially focused on the home of NAACP attorney Arthur Shores, who had successfully won court battles for integration. But others were targeted when they moved into the area, which had been the dividing line between back and white Birmingham. Another famous resident: activist and scholar Angela Davis.

The trail is not within walking distance of the Civil Rights District. Drive toward and look for the green Civil Rights Trails signs. From downtown, head southwest on Rev Abraham Wood Jr. Boulevard, and turn right on Center Street near the Smithfield Library. Other sites include Our Lady Queen of The Universe Catholic Church.

Birmingham’s Vulcan Park has also recently begun walking tours of the area, although they are usually offered in the spring.

Birmingham’s Jewish community had a complicated relationship with the city’s civil rights protests. Some members were staunch allies, playing a key role in ending segregation and bailing out arrested protesters. In 1958, the city’s Beth-El synagogue was nearly destroyed by 54 sticks of dynamite that were found outside the front door.

100 Dishes to Eat in Alabama Before You Die
A must-carry list for any Heart of Dixie road trip.

Elyton Hotel  This newly renovated hotel occupies a former bank building, and has quickly become one of the city’s top places to stay. Its rooftop bar is a favorite with locals and visitors alike.

The Tutwiler – Hampton Inn & Suites Birmingham-Downtown Don’t be fooled by the chain affiliation, this is a Birmingham institution, refurbished and updated for guests. Don’t miss the free chocolate chip cookies at night.

Aloft Birmingham Soho Square  Technically located “over the mountain” in the city of Homewood, this trendy chain offers basic, but stylish amenities.

One of the newest area lodgings, The Valley Hotel in Homewood, has a terrace bar, restaurants and public art.

One of the hottest dining cities in the South, Birmingham offers an array of innovative restaurants.

This offshoot of a famed Charleston, SC, Black-owned barbecue spot has been become a Birmingham favorite. The whole hog style preparation is cooked on site, and located just blocks from the exciting Avondale neighborhood.3719 3rd Ave S, Birmingham, 205/506-2711