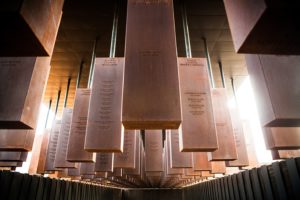 What is the power of a memorial?

In Montgomery, the Legacy Museum and National Memorial for Peace and Justice has single-handedly made the nation confront its violent racial past.

Until its debut in 2018, mentioning racial violence like lynching was still taboo. Some museums made reference, but for the most part, it was too much to put front and center.

The “Lynching Museum” or “Lynching Memorial” as its often called, has changed all that. Across the country, cities from Charlottesville, Virginia, to Abbeville, South Carolina, have taken note of their violent history.

The Montgomery civil rights museum and memorial takes visitors on a gut-wrenching journey through some of America’s darkest moments. It has been called the most important U.S. memorial since the debut of  the Vietnam Veterans Memorial on Washington, D.C.’s National Mall in 1982.

For many, a visit is the emotional climax of a civil rights tour, the scene that stays with them for a lifetime.

Montgomery’s museum complex was created by attorney Bryan Stevenson, founder of the Equal Justice Initiative, which works to free falsely convicted death-row prisoners. Many know of him through his book and film, Just Mercy.  The six-acre outdoor memorial looms on a hill above downtown Montgomery, and includes an adjacent restaurant, exhibit area and shuttle stop.

It’s located about a half-mile from the museum. And while the museum is worthwhile, it’s the monument that staggers. The property recently added evening hours, allowing visitors to tour from 9  to 10:30 p.m. from Wednesday through Saturday. A nighttime visit is all the more haunting, because much of the violence recounted here occurred after the sun set.

And on a practical level, it gives visitors more flexibility while planning their itineraries, since nearly all attractions close at 5 p.m. This way you can spend the day in Birmingham, and drive down to Montgomery after dinner to see the memorial.  (But please call ahead since hours do change.)

Start at the Legacy Pavilion

You’ll want to start your visit at the Legacy Pavilion, 400 N. Court St., which serves as a visitors center for the Equal Justice Institute complex.

Here you’ll find free parking, the ticket office, a gift shop, a cafe and additional exhibit spaces, along with a monument memorializing more than 2,000 Black people lynched in the years immediately after the Civil War and during Reconstruction.

Shuttle buses often operate between the Pavilion and the other sites, but if the weather’s nice, it’s an easy 15 minute walk to the Memorial, and only a few blocks to the Museum. (However, in the heat of summer, the shuttle is a welcome amenity.)

The lynching memorial is the emotional center of the complex, and although it’s abstract, prepare to be shaken by your visit.

The entrance leads by several sculptures and then heads up a gravel path to the memorial, which consists of 800 weathered steel boxes hanging in an open canopy. Each marker represents a county or jurisdiction that experienced a lynching between 1877 and 1950. On the boxes you’ll find the names of forgotten victims, like Henry Smith of Lamar County, Texas. The young man was accused of killing a white girl, and then hanged and maimed in front of a crowd of 10,000.

There’s also Elizabeth Lawrence, lynched in Birmingham, Alabama, in 1933 after she scolded children for throwing rocks. And thousands more.

The information comes from a study that documented more than 4,000 lynchings, which the researchers classify as racial terror killings.

In most cases, the victims were grabbed by a mob and publicly killed, usually by hanging, but also by gunshot or drowning. Sometimes it occurred in public squares, where vendors sold refreshments. Gawkers claimed pieces of clothing or body parts as souvenirs. Occasionally, commemorative postcards were printed.

While the memorial recounts these details in brief side panels, its visual impact is devastating. The markers hang at eye level, but as visitors proceed through the monument, the floor slopes down. Soon the monuments are suspended above, forcing one to look up.

Eventually, hundreds of slabs hang ahead like bodies. A visitor becomes the spectator, like those that came out to watch lynchings, bearing witness to brutality.

Outside the central canopy, a replica of every marker lays in a field. Each jurisdiction is invited to claim their monument to bring home for public display. The intent is clear. As Stevenson said when the monument opened: “Our memorial will become a report card about which communities have owned up to their history.”

Across the street from the lynching memorial stands the Peace and Justice Memorial Center. It houses an auditorium, which hosts a presentation about the memorial at 2:30 p.m. on Mondays, Thursdays, Fridays, and Saturdays. It also has another monument commemorating two dozen people killed killed during the 1950s, showing that racially motivated murders continued.

A half-mile away, the small Montgomery civil rights museum, which is built in a former slave warehouse, offers context.

Beginning with a hologram exhibit of an enslaved man, the Legacy museum argues that lynching was a systematic tool to control and terrorize African-Americans after emancipation. That legacy led to Jim Crow laws legalizing segregation, and continues today in what the museum calls the “mass incarceration” of African-Americans.

And then there are the jars of soil collected from the site of lynchings. Like the makers hanging in the memorial, the hundreds of containers displayed on shelves offer a mute testimony to the horrors of racial violence.

While the ‘Lynching Memorial’ can be overpowering, Montgomery has much more to offer. Make sure leave time to visit Montgomery’s other civil rights sites too.

If you are with a group, Jake Williams who participated in the Selma-Montgomery march provides a memorable tour of his city. Or try the Sacred Ground Tour from $46 per person.

Or consider a three-day tour that visits Montgomery, Selma and Tuskegee.

Lodging can be tight here during special events and when the Alabama legislature’s in session.

Renaissance Montgomery It’s one of the city’s newest, busiest and biggest hotels, and most comfortable. Near the riverfront park and convention center, and walking distance to most sites. 201 Tallapoosa Street, Montgomery, 334/481-5000.

Dwella at Kress on Dexter A newly opened condo hotel within walking distance of the major civil rights sites.

Part of the Equal Justice Institute Legacy Pavilion complex, this is not a typical museum restaurant. The Auburn, Alabama, eatery has quickly developed a Montgomery following for its chef-prepared soul food. 450 North Court Street. 334/386-9116

Look for lobbyists wining and dining legislators at this Montgomery institution. The oyster salad is classic. 8147 Vaughn Road, 334/244-0960.

Why come to Alabama for hotdogs? Because there’s a rich tradition of Southern hotdog joints. This classic diner has served up delicious redhots, fries and burgers for nearly a century.  138 Dexter Avenue, Montgomery, 334/265-6850.