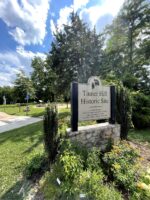 For every civil rights battle that made national news, there were hundreds of others little known outside their community.

One example is in Falls Church, Virginia, just outside of Washington, D.C. Tinner Hill Historic Site and a nearby monument honors an early effort to fight housing segregation. It’s nearly lost in the sprawl of suburban Northern Virginia, standing outside a new Target store, and just off a busy commuting thoroughfare, U.S. 29 (Lee Highway).

But the story is still significant. While Washington, D.C. visitors won’t want to miss sites like the National Museum of African-American History and Culture, the Martin Luther King, Jr. Memorial, and the National Mall, if you’re staying in Northern Virginia, or passing through it, it’s worth a brief stop at Tinner Hill to remember that battles were fought on many fronts.

The small community of Tinner Hill was developed by Black stone mason Charles Tinner and his wife Mary Elizabeth in the late 1800s. He subdivided the land, once part of tobacco plantation, into 10 home lots, one for each of his children.

In the 1915, a son, Joseph Tinner, joined with neighbor Dr. E. B. Henderson and others to protest a proposed city segregation ordinance that would have forced Black residents to sell their homes and move to one part of town, much like Nazis would do just a few years later in Europe. They formed a group they called the Colored Citizens Protective League, which in 1918 became the first rural branch of the NAACP.

It was a brave move in an area where the Ku Klux Klan was active.

(Interestingly, Dr. Henderson was the first black physical education teacher in Washington, and is considered the founder of “black basketball,” first introducing the sport to Black students in 1904.)

The group fought the Virginia segregation law in court, ultimately seeing such forced housing segregation outlawed by the U.S. Supreme Court’s 1917 decision in Buchanan vs. Warley.

Now Tinner Hill is a small park tucked into a residential neighborhood, still occupied by members of the Tinner family. The park, site of an annual music festival, has markers and plaques outlining the community’s story.

Particularly striking is the “Zig-Zag” sculpture, by local artist Martha Jackson Jarvis, which represents how political leaders drew boundaries to dilute the voting power of local Black residents in 1887.

The line placed many Black residents in much-larger Fairfax County, instead of the small city of Falls Church. In a large county, the Black vote would carry little weight.  Interestingly, the zig-zag is also a West African symbol, which means to perform the unusual or impossible.

An arch to the NAACP

Although you’ll have to be careful crossing the busy highway, head across the street to the Target store. At its entrance, you’ll see several historic markers outlining the Tinner family’s work and the creation of the NAACP branch.

Most notable is the 14-foot arch, which is made of the same pink granite quarried, cut and masoned by the elder Tinner himself. It was inspired by his most notable work, which stood for years in the Seven Corners area, a nearby busy retail district. The arch had been destroyed to make way for a car dealership. 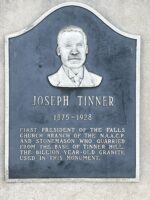 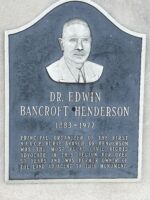 There’s additional symbolism too. The Tinner Hill Heritage Foundation says the arch represents two sides coming together, bending toward each other and providing each other with greater strength. This relates to both two races, and to the combined strength of Joseph Tinner and E.B. Henderson working together.

There’s no shortage of restaurants in Northern Virginia.

You’ll find several Black-owned eateries in the area, including Caribbean Plate, which specializes in Jamaican food; popular Meaza Ethiopian Cuisine; and Granddaddy’s Skillet soul food restaurant, which was founded in the 1920s, and is located about 5 miles away in Alexandria.

The area also has an incredible variety of global cuisines, Just a few miles from Tinner’s, try Korean Fried Chicken at Choong Man Chicken. For Lao and Thai, try Padaek. Or for a variety of Vietnamese choices, visit Eden Center, with literally dozens of restaurants.