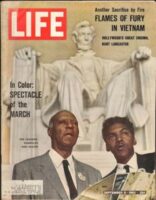 We can thank the March on Washington for “I have a dream,” one of the most famous speeches and phrases in U.S. history.

And we can thank Bayard Rustin for the March.

Across the mid-Atlantic, a traveler can find Bayard Rustin historical markers and learn his story. Rustin, a largely forgotten civil rights activist, was a brilliant strategist, and the key planner and speaker at the 1963 March. But history has largely overlooked him. He was openly gay at a time when it was controversial nationally and in the religious Black community.

Only recently has his memory been resurrected. In February 2020, California governor Gavin Newsom issued a pardon for a 1950s “morals charge” against Rustin for having gay sex in a parked car, leading to a 60-days jail term, and being labeled a sex offender. In 2018, his apartment complex in Manhattan erected an historical marker. There’s also talk of creating a US postage stamp in his name as well.

A traveler can connect with his legacy at the Smithsonian National Museum of African American History and Culture, which displays the inscribed watch that Martin Luther King Jr. gave Rustin in thanks after the March. Other sites include Bayard Rustin historical markers at schools and his former residence. 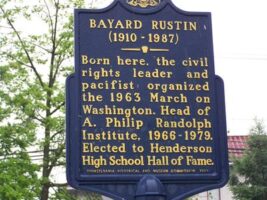 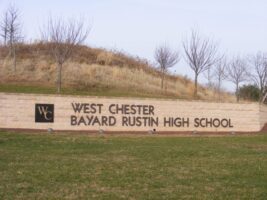 Rustin was born in Pennsylvania, and raised in a Quaker community, which cemented his commitment to non-violence. He was a one-time member of the Communist Party, and was jailed for refusing to serve in the military during World War II.

A marker stands in front of his former school, Henderson High School, in West Chester, and a new high school there bears his name. 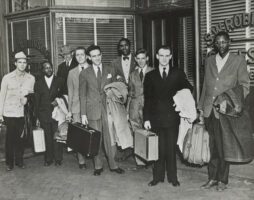 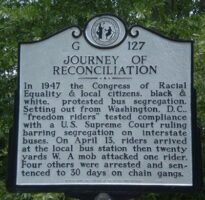 In 1947, he joined the original Freedom Rides, called the Journey of Reconciliation. Organized by Congress for Racial Equality (CORE), this small group of 16 Black and Whiteprotesters traveled through the Upper South to protest segregation on interstate buses.

Rustin and three others were arrested in Durham, North Carolina, and ultimately sentenced to 30 days on a chain gang. Today, an historical marker at North Columbia and Rosemary streets  indicates the site of his arrest.

After Rustin’s morals arrest, he lost his job, and later traveled to India to study non-violence from Gandhi. In 1955, he came to Montgomery, Alabama, to share that philosophy with a young Martin Luther King Jr., who was just starting to lead the bus boycott.

Rustin became a key leader in the civil rights movement, and was the key organizer of the 1963 March on Washington along with A. Philip Randolph, president of the Brotherhood of Sleeping Car Porters and vice-president of the AFL-CIO. They met in New York’s Roosevelt Hotel in 1963 with the top civil rights leaders and formulated the plan for what would be the capital’s largest demonstration.

Rustin’s openly gay lifestyle was at times a hindrance. Some Black church leaders objected to what they considered his immoral lifestyle. But when South Carolina U.S. Senator Strom Thurmond denounced him on the senate floor for his communist past and gay lifestyle, the African-American community rallied behind Rustin. 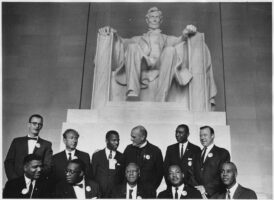 Rustin famously convinced John Lewis to tone down the rhetoric in his speech at the March on Washington.

Today, the Smithsonian National Museum of African American History and Culture displays the inscribed watch that Martin Luther King Jr. gave Rustin in thanks after the March.

Rustin’s dedication to non-violence at times put him at odds with more militant leaders. In the following years, he became an advocate for gay rights.

But only recently has his name been resurrected. In New York, a marker was installed in 2018 in front of his former apartment house in Manhattan, the Penn South complex in Chelsea. His apartment, 9J in Building 7 is now listed on the National Register of Historic Places.

In addition, to a school in his hometown, an elementary school in in Montgomery County, Maryland, just outside Washington also bears his name.

DC Insider guide to the Smithsonian’s NMAAHC, one of the world’s top African American museums: app, cafe, tickets and more