The Help filming locations to visit in Greenwood and Jackson, Mississippi

The film and best-selling novel The Help tells the story of Skeeter Phelan, a white Ole Miss graduate who collaborates on a secret writing project with the Black women who work as maids for white families in 1960s-era Mississippi.

While some have been wary of the story by University of Alabama graduate Kathryn Stockett because it depicts Black females in demeaning, stereotypical roles, others point to the compelling plot and the strong African-American characters.

Filming took place in Mississippi, and the main host cities – Greenwood and Jackson – are still eager to guide visitors to locations from the movie and novel. (Some scenes were also shot in Clarksdale and Greenville). Here’s how to visit The Help filming locations in Mississippi.

Greenwood, a historic Delta town with deep roots in cotton and the blues, is about 90 miles northwest of Jackson and distributes a map and guide to filming locations. The town plays 1960s-era Jackson in the movie. It’s also near a site linked to one of the most notorious and influential moments of the entire Civil Rights Era: the killing of teenager Emmett Till.

While only a few scenes were filmed in Jackson, the capital city has a detailed guide to sites mentioned in the book, from the Junior League headquarters to McDade’s Market.

While most the filming sites in this town of 16,000 are on private property, a fan will definitely recognize city scenes, buildings, exteriors and landscapes. The film-makers liked the frozen-in-time look of the city – including gracious Southern buildings, and “modern” 1960s-era homes.

The major sites are below. Most are private property, so be respectful. You can find a Google map showing them all: here.

Greenwood is located about 10 miles south of Money, one of the notorious spots in U.S. Civil Rights history. It’s the site of Bryant’s Grocery and Meat Market, which is linked to the 1955 murder of teenager Emmett Till. The boy’s crime? Whistling at a white woman, Carolyn Bryant, at the store. Two days later the 14-year-old boy was dragged from his great-uncle’s home and brutalized. His body was later found in the Tallahatchie River. Bryant’s husband and his half-brother were charged with the crime, but acquitted by an all-white jury. Later, they confessed.

Till was visiting from Chicago, and his mother insisted that the funeral have an open casket. Pictures of her son’s mutilated body were seen around the world. The public was outraged and some link Till’s death to the start of the modern Civil Rights Movement. The casket is now displayed at the Smithsonian African-American History Museum, and is one of the most moving exhibits in Washington.

The grocery store has been left as a ruin, and the historic marker has been repeatedly vandalized over the year. But it’s definitely worth the drive to visit a tiny crossroads that changed history.

Greenwood itself has a checkered civil rights past. It’s the birthplace of the White Citizens’ Council, which formed in 1955 to fight desegregation and quickly spread throughout the South. It was considered more socially acceptable than the Ku Klux Klan, often acting behind the scenes with businesses and government.

Many people come from across country to attend the celebrated cooking school run by Viking Range Corp.

TurnRow Books, an independent book store, was a daily hangout for the film’s directors and producers. The store often has signed copies of The Help, a great souvenir of your visit.

If you want to sleep where the stars stayed, try the Alluvian, a boutique hotel renovated by the local Viking Range Corp. It has won national attention for design, and the Mississippi art gracing the walls. The Thursday night happy hour was a favorite with the Hollywood visitors. The hotel’s also home to Giardina’s, a famed Creole-Italian restaurant serving diners since 1936.

Jackson has been eager to embrace its role in The Help. It has maps and tour routes for fans of the novel, which has been a book-club staple for several years now.

The story’s set in Jackson’s historic Bellhaven neighborhood. Although a work of fiction, many of the sites in the book are real. Click here for a detailed driving tour of the neighborhood sites tied to the novel. This link provide a tour of other Jackson sites from the novel. 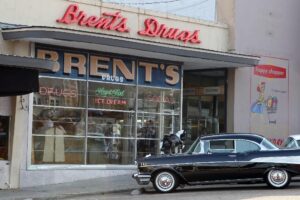 And here are all the sites on a Google map, below.

Jackson is worth a visit alone for its comprehensive and stirring Mississippi Civil Rights Museum. It’s modern and interactive , with films narrated by Oprah Winfrey and exhibits that will make you stop in your tracks. You can (and should) easily spend a couple hours here.

Other than the museum, the city’s most important civil rights location is the site of Medgar Evers‘ assassination. The field secretary for the NAACP was shot in his driveway in 1963 hours after President John F. Kennedy gave a speech supporting integration , reacting to Alabama governor George Wallace’s defiant “Stand at the Schoolhouse Door” earlier that day, when he tried to block Black students from enrolling at the University of Alabama in Tuscaloosa. The event, mentioned in The Help, made headlines around the world.

Evers helped lead a boycott against white Jackson merchants, and was a key player in James Meredith’s integration of the University of Mississippi (Ole Miss), which outraged many white Mississippians. Evers, who served in the U.S. Army, was buried at Arlington National Cemetery in Virginia.

Evers’ assassin, Byron De La Beckwith, a member of the White Citizens’ Council, was twice tried and freed when juries were unable to reach a verdict. In 1994, charges were brought again and he was convicted.

Evers’ home, 2332 Margaret Walker Alexander Drive, was recently marked with a Mississippi historic marker. Visitors will notice it does not have a front door. The Evers family thought it would be safer to have an entrance through the carport. Tours of the home are by appointment. To schedule a visit , call 601-977-7839 or 601-977-7710 or email mwatson@tougaloo.edu. Or take a virtual tour below.

For an authentic taste of the South, try a pig ear sandwich from the Big Apple Inn in Jackson’s Farish Street Historic District.

For a treat, “Help” fans may want to splurge for a stay at the historic Fairview Inn, which housed the cast during filming, and makes an appearance on page 148 of the book. If nothing else, try to stop by for their Sunday brunch.