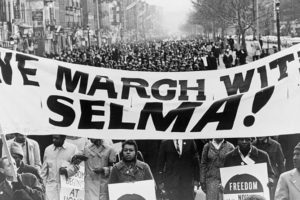 Only 54 miles separate Selma and Montgomery, but that span changed history. A five-day protest march to Montgomery in March 1965 riveted the nation, and attracted protesters from across the globe. 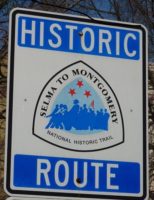 When the marchers finally finished at the Alabama State Capitol, thousands gathered to hear Martin Luther King Jr. declare victory in his “How Long? Not Long” speech. The world was put on notice that the push for voting rights could not be ignored. And within a few months the U.S. Voting Rights Act was signed into law.

The marchers’ route is now preserved as a National Historic Trail, complete with markers, visitors centers and memorials. With little development save historic markers, it’s a struggle to imagine the mixture of triumph and fear marchers would have felt staying here. But this guide will make the story come alive.

It focuses on the trail itself and the sites between Selma and Montgomery, which mostly follows U.S. Highway 80. You can drive the route in just over an hour without stops, but to make the most of your visit, plan on two to three hours for the trip.

You’ll want to combine the trail with tours of the two cities. For information  please visit our Montgomery and Selma guides.

The trail is considered a National Scenic Byway/All-American Road, a federal designation which includes famous roads like Route 66, the Blue Ridge Parkway and the Florida Keys Overseas Highway.

The trail begins at the Brown Chapel AME church in Selma and ends at the Alabama State Capitol in Montgomery. Along the way, you can visit camp sites where the marchers overnighted, a visitors center and historic markers. We also suggest a detour to Hayneville, site of the killing of an Episcopal seminary student.

Although it’s tempting to walk the route, unfortunately, it’s not advised due to unsafe walking conditions along busy Highway U.S. 80, and the lack of services. Cyclists, though might want to check with the Montgomery Bicycle Club, which sponsors an annual bike ride along the trail every winter.

I like following the marchers’ route from Selma east to Montgomery, but many travelers will be starting from the east and coming the other way. It doesn’t matter. You’ll still be covering the same path the marchers followed, and seeing the same scenery.

The events leading up to the march are covered in our Selma guide. But it’s important to understand the context for this historic protest.

The march was more than a month in the making, beginning with the state police murder of Jimmie Lee Jackson, a local resident and protester in nearby Marion, in February. That’s what first led to a call for a march to Montgomery. 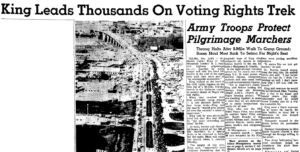 The march likely would not be remembered today if not for “Bloody Sunday,” the televised beatings, tear-gassing and attacks on marchers by white law enforcement officers on March 7. When those images flashed around the world, protesters and religious leaders began to descend on Selma to support the cause.

When the protest was finally allowed to proceed by U.S. federal judge Frank Johnson on March 17, the world was watching. And thousands of protesters began the journey on the morning of Sunday March 21.

For travelers starting in Selma, you cross the Edmund Pettus bridge, site of the Bloody Sunday beatings, and continue east on U.S. Highway 80, once known as the Jefferson Davis Highway, named after the Confederate President.

Only a few miles outside of town, you’ll notice see a sign marking the first campsite where marchers spent the night. It’s not far from town because it wasn’t until late in the day that marchers – under the protection of federal officers and national guard troops — finally left the city.

Exit the highway to the right, and then take a quick left to see the privately owned David Hall Farm. Although you can’t visit, it does put you in the actual footsteps of the protesters.

The next stop is the excellent Lowndes County Interpretive Center – a must-visit to truly understand the significance of the route. The National Park Service site (shown below) has a design inspired by Selma’s Brown Chapel AME Church, where the march began. The center welcomes visitors with an introductory film and sets the scene for the march.

Interactive exhibits help put you at the scene of Bloody Sunday, and then on the historic five-day journey to the state capital. 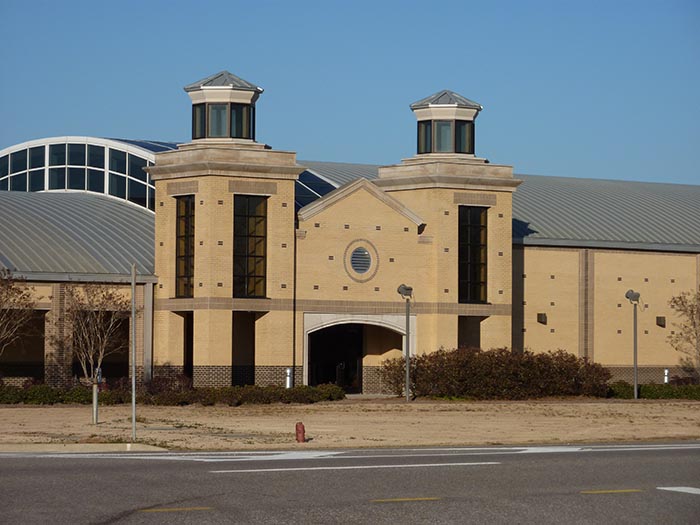 The visitors center is built at the site of Tent City. This was the home of area sharecroppers, who were kicked out of their homes when they tried to register to vote.

Indeed, Lowndes County was a center of African-American activism, and became the home of a political party, the Lowndes County Freedom Organization (LCFO), which adopted a black panther as its symbol. Its advocacy for  Black power influenced activists in Oakland, California, who adopted the logo for their new organization, the Black Panther Party for Self Defense.

Shortly after leaving the center, another road sign notes the second campsite, the Rosie Steele Farm. The property belonged to a Black woman, who let the marchers spend the night. There’s no exhibit other than the sign.

The white Detroit mother of five was a volunteer, helping shuttle marchers up and down the highway. She was shot while driving a station wagon. Four Ku Klux Klan members from the Birmingham area were soon arrested for the murder. One of the alleged killers was an FBI informant.

A detour to Hayneville, south on County Road 97, leads to a memorial at the Lowndes County Courthouse, honoring Jonathan Daniels, an Episcopal seminary student. Daniels died in August 1965, months after the march was over. He was defending a Black teenage girl, who was threatened by a state highway department worker. The worker pointed a shotgun at the girl, and when Daniels pushed her down to safety, he was shot point-blank. Daniels is considered a martyr by the Episcopal church, and is remembered as a civil rights hero by his alma mater, the Virginia Military Institute in Lexington, Virginia.

After Hayneville, you can take County Road 21 back to Highway 80 to continue to Montgomery.

To see the third campsite, you must backtrack a few miles west (to the left) to the Robert Gardner Farm. It doesn’t have exhibits, but is marked with a sign. Then, you’ll take a U-turn to continue east toward Montgomery.

A concert at St. Jude

Marchers spent the last night on the outskirts of Montgomery at the City of Saint Jude, a Catholic institution, which housed the first integrated hospital in the southeastern United States. King knew the place well. His two oldest children had been born here years earlier. 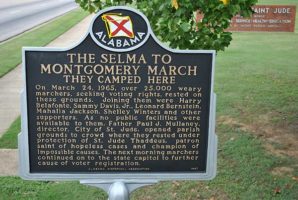 During the march, the campus was the only place the thousands of marchers could camp in safety in urban Montgomery. The night was a scene of celebration, where Hollywood stars and entertainers, performed for the protesters in what was called the Stars for Freedom concert.

A victory lap in Montgomery

There’s much to savor about that last day’s march into the former capital of the Confederacy.

For King, this was a homecoming to the place where he began his battle for civil rights a decade earlier with the bus boycott. The speech he gave on the grounds of the state capitol was one of the best of his career.

If you are traveling with a group in Selma, consider hiring local guide Joanne Bland, who participated in the Bloody Sunday march. Her account of that horrifying day is riveting, and makes the history come alive.

Or you might enjoy a three-day tour that visits Montgomery, Selma and Tuskegee.

And if you’re in Atlanta, and want to visit Alabama’s civil rights sites, you can take a 12-hour tour with transportation that will take in key landmarks in Birmingham, Selma, Montgomery and Tuskegee.