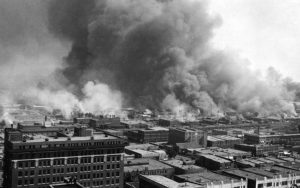 The single worst case of racial violence in U.S. history is little known even in its home state of Oklahoma.

Only in recent years has the deadly destruction known as the Tulsa Race Massacre, gotten national attention. Ironically, it was a 2020 Donald Trump campaign rally in the city that first introduced many to the horrific attack. The John Hope Franklin Reconciliation Park acknowledges and commemorates the shameful history. It’s located just a few blocks from the new Greenwood Rising Tulsa Massacre museum.

Located about four hours from Topeka and Little Rock, Tulsa provides a natural stop for visitors traveling through the region, introducing them to a horrific event overlooked by most U.S. history books.

The incident happened in 1921 in the Greenwood neighborhood of Tulsa on Memorial Day weekend. The once-prosperous 35-square block neighborhood has been called the wealthiest African-American community in the country, which earned it the name “Black Wall Street.” Its population included lawyers, doctors and bankers, many who had prospered during the city’s recent oil boom.

The riot did not happen in a vacuum. White mob assaults on Black neighborhoods had been occurring for several decades, beginning  in Wilmington, North Carolina in 1898, which was the first major community attack since Reconstruction. In the following decades similar attacks occurred around the country in New York City, Boston, Akron, Ohio and many other places.

The riot was sparked when an African-American teenager Dick Rowland, the son of a black businessman, was working as a messenger and was accused of assaulting a white female elevator operator. The charge seems dubious given that the two were only together while the elevator traveled from the first to third floor.

The young man was arrested, and a crowd formed outside the jail threatening to lynch him. An armed black crowd came to save him, and a gunfight broke out.

After that a white mob descended on Greenwood. 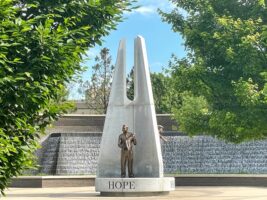 Over a two-day period on May 31 and June 1, the neighborhood was destroyed by fire, gunfire and even packages of dynamite dropped from an airplane. Historians say it was the first time in American history that Americans were aerial bombed in the United States. 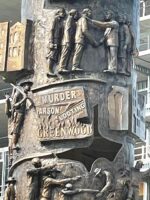 A man with a machine gun also opened fire on the neighborhood from the top of a grain elevator.

An estimated 10,000 Black residents were left homeless. While the official death toll at the time was listed as 36, a state commission in 2001 put the tally as high as 300. Searches continue for the mass graves where the victims were buried. No one was ever arrested or charged for the crimes, and no insurance companies ever paid a claim on the damage, which has led to calls for reparations for descendants of victims.

Only in recent years has the massacre been officially recognized at the John Hope Franklin Reconciliation Park, dedicated in 2010. This is not a look-and-go bronze statue but instead an immersive plaza that challenges visitors, taking them through Oklahoma history, from the Trail of Tears and the Land Rush to the prosperity of Greenwood, and its destruction.

The park, named for native Oklahoman John Hope Franklin, a noted historian and son of a riot survivor, has two sections: Hope Plaza and The Tower of Reconciliation. 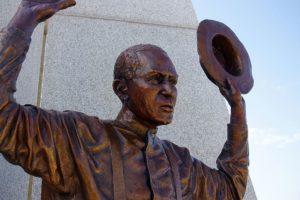 The plaza centers on a 16-foot granite structure with three bronze sculptures labeled Hostility, Humiliation, and Hope. “Hostility” shows a white man holding two shot guns. “Humiliation” displays a black man with his hands raised above his head. And “Hope” shows the white director of the Red Cross holding a Black baby. Each figure is based on photos of people at the riot.

The statues were all created by sculptor Ed Dwight, who along with being an artist was the first African American to be a candidate for astronaut training. 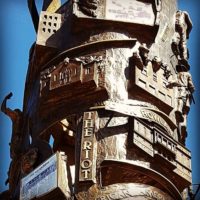 The 25-foot Tower of Reconciliation at the center of the plaza explores the history of African Americans, starting with life in Africa through the Trail of Tears to the riot,

The site is included in the International Sites of Conscience, a coalition of hundreds of locations around the world, and the National Park Service’s African American Civil Rights Network.

Nearby, the Greenwood Cultural Center has photo exhibits and a small gift show with “Black Wall Street” merchandise. A short walk along the Pathway to Hope, links the park to the Greenwood Rising museum, which opened on the 100th anniversary of the attack.