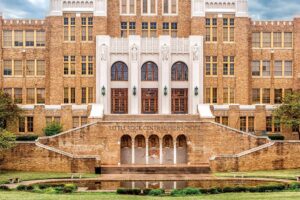 One of the most dramatic civil rights conflicts occurred in 1957 when Little Rock tried to desegregate its schools, starting with Central High School.

The story is told at the top Little Rock museum for civil rights travelers, the small but wonderful National Park Service visitors center. It’s located in a converted Mobil/Magnolia gas station across the street from the school.   It was here that reporters set up camp to watch the conflict unfold.

Visitors learn how the angry mobs that taunted the “Little Rock Nine” shocked a nation, and led U.S. President Eisenhower to call in federal troops to escort the students to class.

Interactive exhibits take visitors through the Little Rock Crisis, as it was eventually named. It grew from the 1954 U.S. Supreme Court ruling, Brown v. Board of Education, which declared segregated schools unconstitutional. The Little Rock school board agreed to admit African-American students, but the local population literally fought back. The following year the city closed down all its schools so that it wouldn’t have to admit African-Americans.

Information on the crisis is available in Spanish here.

Park rangers  and exhibit do an admirable job of telling the story. But you should also download a free walking tour app, developed by students at the school. There’s an Android version, an Apple IOS version,  and also a website presenting the same information as an interactive virtual walking tour.

Honored at the state capitol 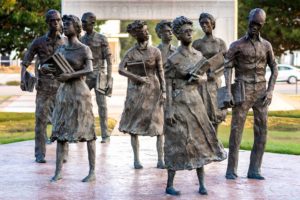 A memorial  located on the north side of the State Capitol grounds called “Testament: The Little Rock Nine Monument” commemorates the students who made history. It’s worth a stop to look at their faces, and wonder if you would have been willing to take such a brave stand.

The statue’, which faces the governor’s office, was the first civil rights monument located on any state capitol grounds in the South. Today you’ll find them in Atlanta, Georgia and Richmond, Virginia, among other places.

As one would imagine the experience altered each of the students’ lives. Some stayed at the school, enduring taunts and abuse.

The monument includes moving quotes from each of the former students.

“I’ll tell you one thing: it was my dad who lost his job … It was my mother who got the terror calls …”who was frightened for my life …”they were the heroes,” says Minnijean Brown Trickey.

“Somewhere along the line, [staying at Central High] became an obligation. I realized that what we were doing was not for ourselves,” offer Elizabeth Eckford.

“In Little Rock, every possible decision had a racial component: where you could live, where you
could go to school, whether you could work or not, whether you could get a bank loan…who you could marry. This made no sense to me, especially as I discovered there is no such thing as race.” reflects Terrance Roberts.

Ultimately the former students went on to productive lives. Ernest Green was the first Black student to graduate in the class of 1958, while Carlotta Walls Lanier graduated the following year, and Jefferson Thomas in 1960.

Minnijean Brown Trickey was expelled and graduated from high school in New York, and went on to work in the Clinton administration.

Elizabeth Eckford who is shown in the famous photo walking past taunting students, graduated from night school.

An Arkansas Civil Rights History app guides visitors to significant city sites, including the Daisy Bates House, 1207 West 28th St., owned by publishers of the city’s Black newspaper. This home served as the unofficial headquarters for the students and their families during the crisis. Another Little Rock museum at the Old State House, which included exhibits on civil rights history from 1836 statehood through the 20th century, is also included on the app.

Little Rock MarriottA downtown convention-style hotel offers easy access to city sites. Rates can be affordable when there’s not a convention in town.

Capital Hotel This beautiful historic hotel has been the city’s premier lodging for more than a century.  Upgrades have brought it into the 20th century, but if the walls could talk, what tales it could tell of Arkansas political wrangling and shenanigans.

For memorable food, and civil rights history, try the Lassis Inn. The Black-owned restaurant won national attention in 2020 when the James Beard Foundation honored it with an “America’s Classics” award. 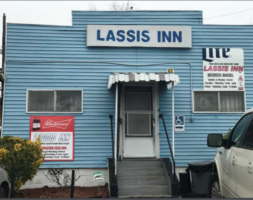 Community leaders often met here in the years leading up to Central High School’s integration. Try the fried catfish, or their famous “fish ribs,” which are made from buffalo fish.

River Market — Can’t decide between falafel, tacos, or chicken teriyaki, try this lively downtown food court in the midst of a bustling market.